Skip to content
Finally, as long ago promised, I’m ready to write about my elimination diet venture based on my Mediator Release test results. First of all let me say, elimination diets are not for sissies. I did  one years ago, back in my Bastyr days, and I did not fare so well. I only made it one week and then threw in the towel. I thought this time would be different. And it was, but I still was not perfect. Did I cheat? Yes. Did I follow the rules by the book? No. What a terrible example I am. But I still learned a lot through the process. I also gained INCREDIBLE respect for anyone that can follow such a strict diet, especially if you have a family to feed as well, and make it through. I have many clients like this and they are rock stars. Me, not so much.
One reason for my lack of motivation is that honestly, I didn’t think I really had any food sensitivities. Yes, I have some annoying digestive issues and other such things, but those things start to become the normal annoyances of life and are often overlooked. My random problems? Well I will divulge a little bit of my personal healthy history. For starters, I started to get acne on my back during my first year at Bastyr. Yeah, yuck. It seemed to perfectly coincide with an intensely stressful period of my life but unfortunately it never really went away. I thought there was nothing I could do about it. I also mentioned digestive complaints. For unexplained reasons I would have days where I would get bloated and gassy, and then other days I would be fine. I tend to eat a high fiber diet so I just chalked it up to that. More recently, I started to get phlegm in my throat and felt this constant need to clear my throat. Super annoying. Also within the last year my eyelid would twitch, often several times per day. Also super annoying. I could not figure out for the life of me what was causing it. Besides these random things, I usually feel great. I have lots of energy, sleep well, and generally lead a low-stress existence. So obviously I thought … food sensitivities? Hardly. I’m not your typical candidate.
As you can clearly guess, I was wrong. My results were quite intriguing. Some things were not surprising; others were. Where to start? I will list my yellow reactive (moderate reactive) and red reactive (high reactive) foods and then go from there.
Yellow: Apricot, blueberry, cranberry, quinoa, catfish, clam, dill, basil, turmeric, milk, coffee, sorbic acid, caffeine, beef, turkey, pork, egg, cola, baker’s yeast, almond, green pea
Red: Grapefruit, cucumber, yogurt, cinnamon, yogurt 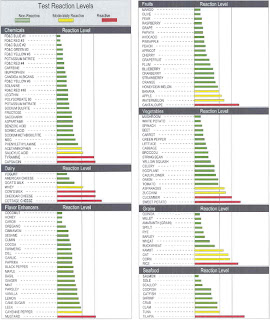 *Not my results but an example of what the report looks like
Yikers, right? The good thing is that my reds are few. Whew. And in reality my yellows aren’t that overwhelming. But quinoa? Coffee? Baker’s yeast? Cinnamon? All things I eat with regularity. Sad day.
Given these results, I initiated the LEAP diet protocols. Not perfectly, as I said before, but fairly well. I did have a couple of those “oops, I wasn’t supposed to eat that” moments, but more or less I followed the plan. Not surprisingly, after a day or two of feeling moderately worse, I actually felt pretty fantastic. Mild bloating that I thought was just a part of everyday life was gone. The eye twitching? Gone. Gas and stomach bloating? Apart from eating beans, gone. The last things to clear up were my back and throat, but after about 10 days those were almost gone as well. Amazing for someone who didn’t think they had food sensitivities, eh? I’m constantly floored how powerful food is and how such a good thing can be detrimental when our body’s natural defense system isn’t working as intended.
Now you can clearly notice that MRT does not test for every food on the planet. After following the initial diet phases it becomes time to introduce foods not tested for. That is where I’m at now. I try to stick pretty well to my “safe” foods and every couple days try an untested item, such as other legumes, various spices, products with untested ingredients, etc. It’s a long road, but it’s so great to now know what I need to avoid. And the hopeful thing is that in 6 months to a year I may try to add back some of my yellow and reds and see if my immune system has calmed down enough to allow them in small amounts.
This whole process has also taught me to adapt recipes so they exclude items I can’t have. I swear cinnamon is in everything delicious, so I have had to learn how to substitute or change the spice combination to create something palatable. And the loss of coffee? I’m coping far better than I thought, not to mention saving lots of money on Americanos and the like. Also bread is a no-no due to baker’s yeast, which initially was exceedingly disappointing, although I did count my lucky stars that wheat was ok.  Literally just today I baked my first loaf of yeast-free bread using whole wheat flour. Yes, I can have toast again. The world just got a little brighter.
Posted in Food Allergies, LEAP, MRT
← Bananalicious Buckwheat-Millet Bread (Vegan, Gluten-Free, Tasty)Buckwheat Pancakes (GF, DF, soy-free, egg-free) →