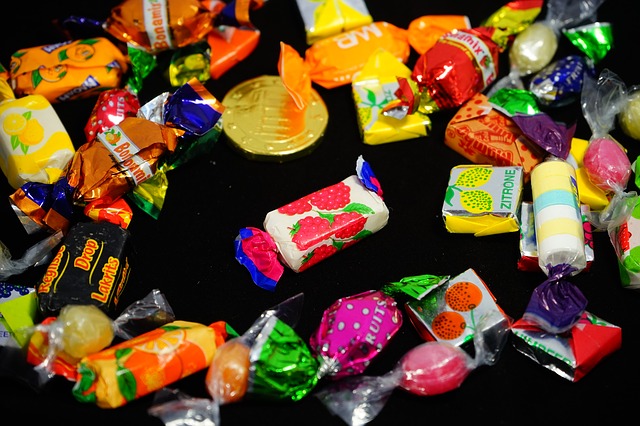 It’s that time of year again that I’ve come to dread: Halloween. It’s not so much that I mind the ghoulish decorations or creepy costumes. It’s mostly the colorful wrapped confections that put me on edge. All month long, for 31 exhausting days, I’m bombarded by two normally very sweet little boys whose sole mission is to find and consume candy. You just can’t avoid it. It’s in the stores, it’s at the dentist’s office, it’s at the school party …. the stuff is everywhere and every second it seems it’s all my kids can think about. Ok, I might be exaggerating slightly. They do think about other things, like TV shows and Legos, but it is amazing how much they love candy. So many tears when Mom has to say no, no, and no again. Like I said, exhausting.

You might now be thinking I’m pretty much the meanest mom on earth. Who would deny their kids a few harmless pieces of Halloween candy? Look, I do give in once in awhile, but I also say no a lot. The average American kid between the ages of 4 and 8 already consumes around 21 tsp of sugar a day. That is an insane amount, as in more than 2 cans of soda worth. Halloween isn’t necessarily to blame for this, but there’s no reason to add to our already sugar laden diets.

Apart from the sugar, the thing that really scares me about Halloween candy is the ingredients and additives. Yes, those pesky colors, dyes, preservatives, GMOs (genetically modified organisms) and even trans fats. They help make products tasty and eye-appealing, yes, but let’s face it, it’s not food.

I could go an on with these. You get the picture. Halloween candy is far from harmless. I cringe every time I give in. I get it that kids need to be kids, but when did that become letting them eat sugary confections loaded with food additives, GMOs, and trans fats?

My back up plan has been to get some tasty treats in the house that while still admittedly have sugar, at least they use natural food dyes and organic sugar cane (not saying its healthy, just less harmful). I also explain to them what is in typical candy and why it’s not good for them. I find that providing some context around my apparent meanness really helps. Then providing an alternative, albeit still carefully portion controlled, seems to keep tears at bay.

I challenge you to seek out some less chemical-laden options for the little ghosts and goblins that end up on your doorstep this year. Most of these will be found in the “natural” section of your local grocer. Better yet? Give out a small toy instead or include some dried fruit and nuts along with whatever candy you choose to dispense. Maybe, just maybe, someday our country will wake up and get over this insane sugar addiction that we inflict on ourselves and our young. Maybe?