Skip to content
Most of us have Christmas traditions that we look forward to every year.  Generally these involve decorating the house, trimming the tree, and of course, baking.  What would a holiday be without good food to share with family and friends?  Many people love to bake Christmas cookies (and I like to eat them) but baking cookies has never been a favorite past time of mine.  Not sure what is was….maybe the desire for something more exotic and “European,” but Stollen making has become a new tradition for me, three years and counting.  And no, I’m not German, but I do have aspirations of going to Germany some year to partake of their rich Stollen tradition (I hear it varies from town to town, with each town taking great pride in their recipe and method of preparation).  Being that I only get to practice once a year, my skills are still needing refinement, but I will say each year it gets better and better.  Many people asked for my recipe last year and despite my good intentions, I never quite found the time to sit down and write down the recipe I was using.  Finally…….I am doing so.  Thanks to all who were so patient with me.  Last year about this time my son had only just started sleeping through the night and was taking only 2- 1 hour naps a day (he now takes one 3-4 hour nap) so needless to say,  I am now less sleep deprived and have more time. =)
I do intend to play around with new recipes someday, but for now I have stayed with recipes adapted from a local German cook/baker because I’ve met her and I know she is German.  I’m a little wary of random recipes on the internet when it comes to something this labor-intensive.  It had better be the real deal.  These are from Erika Cenci’s cookbook, A Touch of Europe.  I highly recommend her book for wonderful European baking recipes and a great selection of hearty, German meals.  She also runs a Bed and Breakfast in Yakima called, not surprisingly, A Touch of Europe.  It’s lovely.
One interesting side note is that the shape of Stollen was originally meant to depict a swaddled baby Jesus.  You can think of that as you are molding your sweet little bread in the final stages.
Dresdner-Style Stollen
(makes 1 large stolen)
·         1 package of active dry yeast
·         1 tsp sugar
·         ¼ cup warm water (110 F)
·         ¾ cup warm whole milk (110 F)
·         ½ pound unsalted butter, melted
·         ¼ cup sugar
·         ½ teaspoon salt
·         1 teaspoon finely grated lemon zest
·         ¼ teaspoon cardamom, ground
·         ¼ teaspoon nutmet
·         3 – 3 ½ cups of white bread flour, plus extra
·         ½ cup dark raisins
·         ½ cup golden raisins
·         ½ cup dried currants
·         ¼ cup candied citron, chopped
·         ¼ cup candied orange peel, chopped
·         ½ cup of hot rum or water
·         ½ cup blanched almonds, coarsely ground
·         ½ cup almonds, coarsely ground
·         ¼ cup of unsalted butter, melted
·         2 tablespoons of sugar
·         ½ cup powdered sugar
In a large bowl, combine yeast with 1 teaspoon of sugar, stir in water, and let stand until foamy, 5-10 minutes.  Stir in warm milk, butter, sugar, salt, lemon zest, cardamom, and nutmeg along with 2 cups of flour.  Beat until well blended, cover, and let rise in a warm place for 20 minutes.
Place raisins, currants, citron, and orange peel in a medium bowl, pour rum or water over mixture, let stand 10 minutes, drain and pat try.
In a medium bowl, combine drained fruit and nuts, add 1 cup of the remaining flour, and toss until fruit and nuts are well coated.  Add coated fruit and nuts to the dough, and work fingers until fruit and nuts are distributed in the dough.
Knead on a lightly floured board until smooth and elastic, 6-8 minutes.  If too sticky, work in a little more flour.  Place in a greased bowl, turning to grease top.  Cover and let rise in a warm place until doubled in bulk, about 1 hour.
Turn out on board and roll the dough into an oblong shape, ½ inch thick, and then brush melted butter over the top.  Fold in half, lengthwise, in pocket book shape so that the upper half does not quite cover the lower edge.
Form into crescent, place on greased baking sheet, brush top with melted butter, and let rise again until doubled, about 40 minutes.
Preheat oven to 350 F.
Bake 35-45 minutes or until Stollen is golden and firm.  Remove Stollen from the oven, brush with melted butter, sprinkle with sugar, and dust with powdered sugar.  Remove Stollen from baking sheet, wrap tightly in parchment paper and wrap again with foil or towel, and let it rest for about 4 weeks. 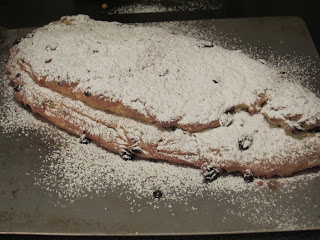 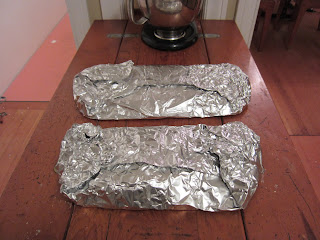 **Ideally you make Stollen in early November to be consumed at the beginning of the Christmas season.  I have never had my act together that early for that to happen so it usually ends up being New Year’s Stollen.  Actually this year, since I was late in making it once again, we just decided to forgo storing it and starting eating it right away.  I think there is a taste improvement if you can wait at least a few weeks.
**Another note: I never get this Stollen to rise very well for me.  It always looks a lot thinner than the pictures I see on the internet.  If you have better results or suggestions for improvement, I’m all ears.
Here is another Stollen recipes that I love.  It’s a lot less labor-intensive because it is not yeast-based.  It’s also a lot sweeter and more like sweet pastry instead of fruit cake.
Sweet Marzipan Stollen
Dough:
·         ½ pound cream cheese, softened
·         ½ pound unsalted butter, softened
·         ¼ cup, plus 1 tablespoon sugar
·         3 eggs
·         1 tablespoon lemon peel, finely grated
·         3 ½ cups unbleached white flour
·         3 teaspoons baking powder
In a large mixing bowl, beat cream cheese, butter and sugar until creamy.  Add eggs, lemon peel, and gradually sift-in both flour and baking powder.  Shape dough into a ball.
Marzipan Filling:
·         ½ pound marzipan
·         2 egg whites
·         2 teaspoons of rum
In a small mixing bowl, beat together marzipan, egg whites and rum until light and fluffy.  Set aside.
Nut-Raisin Filling
·         ½ cup almonds, finely ground
·         ½ cup pecans, finely ground
·         1 ½ cups golden raisins
·         2 tablespoons rum
·         2 tablespoons butter, melted
·         2-3 tablespoons powdered sugar
In a medium bowl, combine nuts, raisins and rum.  Set aside.  Preheat oven to 350 F.
On a lightly floured surface, roll out dough to roughly a 15 x 12’’ oval, ½ inch thick.  Spread marzipan filling over dough, spread nut-raisin filling over marzipan filling, fold oval lengthwise, almost in half, leaving about 1 ½ inches of bottom of dough extended.  Gently press top edge to bottom edge to seal.  Place on baking sheet, bake 30-40 minutes or until browed.  Brush with butter, dust with powdered sugar.  Remove from baking sheet and cool on wire rack.
Being that this is a non-yeasted and much more sweet Stollen, this one doesn’t need to sit for weeks.  Enjoy as soon as cooled! 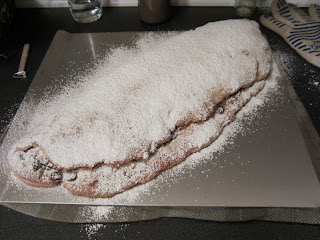 Posted in Uncategorized
← Parents’ Influence On Children’s Eating Habits is LimitedSpice it up! →