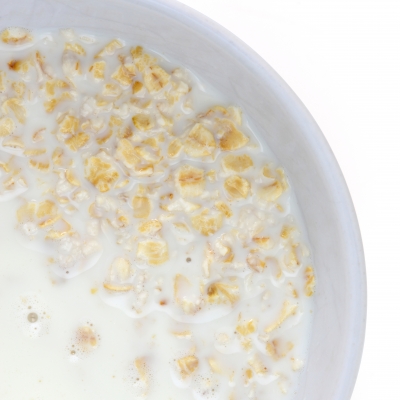 As I was pouring myself a packet of instant oats a few months back, topping it with scalding water and then other condiments, I got to thinking of a headline I’d read somewhere online about how seriously unhealthy instant oats were for you. I didn’t actually read the article, but the message stuck with me: somehow instant oats are bad. Bad like doughnuts? Bad like high fructose corn syrup? Bad like TV dinners? I wasn’t sure. I just knew that someone (and in fact many) had deemed it unhealthy. I bookmarked it in my brain to loop back around to that topic sometime in the future.

Well sometime in the future is now, and I’ve done quite a bit of reading about the ominous oat and its supposed character flaws. For example, instant oats are “high on the glycemic index.” Instant oats are often “full of added sugars and additives.” Its’ friendlier counterparts, Old Fashioned rolled oats and Steel-cut oats are lower glycemic and are typically purchased plain, eliminating those pesky added sugars and such. The winner seemed clear.

Now first let me say I was once a purist. I almost never purchased instant oatmeal because frankly I loved the taste of freshly simmered oats, especially when mixed with milk and stewed ripe banana or combined with home-canned peaches and roasted walnuts.

Then … I had kids. Kids do not care that good, wholesome food takes time, especially when they are infants and need you 24/7. They seem to care even less when they are two and wake up hungry, ready to consume anything they can find unless you put breakfast in front of them promptly (and they will find things, let me tell you). I went from slow cooking old-fashioned oats once or twice a week to going almost two full years without stirring a single pot of oatmeal over my beloved gas stove. I became “that” mom, chucking packets of instant oatmeal in bowls and praying the water would boil faster so we could eat and avoid meltdown or alternatively avoid destruction of my house while I was otherwise occupied with breakfast duties.

So I became an instant oatmeal junkie. But was that bad? I still wasn’t sure, even as a Dietitian. I mean yeah, I get the glycemic index argument. It measures the effect of a single food on our blood sugar level. High GI foods raise your blood sugar more quickly than other foods. White bread, for example, has a high GI. Quinoa, a whole grain, has a much lower GI. Whole oats are low-moderate in terms of GI, however instant oats are in the high GI category.

What GI doesn’t account for is what you eat it with. If you eat a bowl of plain, instant oats, the GI is fairly high. Not as high as white bread or white rice, but still high because it’s been broken down, “pre-digested” if you will, making the carbohydrates readily utilized by your body (and readily cooked by scalding hot water instead of 20+ minutes of cooking!). However, the GI changes if you eat those oats with other foods that take longer for the body to break down. Think nuts, seeds, fruit, etc. Once all that mush hits your stomach at once, it now takes longer for all that carbohydrate to hit your blood stream. Essentially, you can mitigate the high GI of oats by eating it with lots of protein and healthy fats.

So, while I agree that traditional rolled oats or steel cut oats are better for you and better for your blood glucose, let’s not demonize instant oats so quickly. What about those people, say new moms with demanding babies, or people who must wake up at some insanely early hour for work, or even teenagers who don’t have the desire or let alone knowledge to sit at the the stove for nearly half an hour stirring a pot o’ porridge? Clearly food combination is the key, and frankly that is the missing point in many articles that call out instant oats for being blood-sugar antagonists.

Maybe you are now saying “Alright, instant oats are a go! Where is my kettle?” Not so fast. Quality still counts. Remember that criticism that instant oats are loaded with sugars and additives? That part is very true. You have to read labels. Most instant oatmeals ARE loaded with extra freebies to improve your taste adventure, as those companies would likely call it. Often they add sugar, dehydrated fruit, and stabilizers such as guar gum in addition to coloring and synthetic vitamins. That added sugar can raise the GI even further and almost certainly make you feel hungry well before lunch time rolls around.

So next time you reach for that instant oats packet, make sure you add some healthy protein, fat and fiber to decrease the GI. Here’s a quick list of things I add, in various combinations, to my oatmeal:

And here is example of what my bowl o’ oatmeal often consists of:

1 packet of Maple Nut instant oatmeal by Natures Path
2 Tbsp Flax seed
1 Tbsp Hemp seed
¼ cup blueberries
2 Tbsp chopped, toasted Pecans
(and sometimes I even have a scrambled egg on the side which adds even more protein!)

You see? Now you don’t have to feel bad about your secret instant oatmeal fetish. It’s ok. Just pick up a few extra ingredients on your next Trader Joe’s run and you’ll be set. Then … enjoy!

Posted in General Nutrition and tagged Danielle VenHuizen, Food Sense Nutrition
← How to Practice Moderation During the Holidays: Giving Yourself PermissionBolster Your Immune System Naturally →