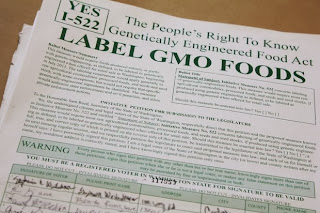 Alright Washingtonians, it’s getting real in the Whole Foods parking lot again. The right to know about GMO (genetically modified organisms) food is at stake. Frankenfoods are about to take over and destroy our earth. You are about to be one giant lab experiment unless we stop GMOs in their tracks. Or is that really the truth?

The genetic engineering of foods is the process of inserting specific changes in the DNA of plants to create or enhance traits that would make them more resistant to disease, produce better yield, or change their nutrient profile. Traditionally crop traits have been altered by cross-breeding, but changing DNA can target the desired outcome much more specifically in less time and with less error.2,3

The bill we have before us, therefore, is to tell the legislature and food manufacturers that we have the right to know if these methods are being employed in the food we are choosing to consume. The goal is to label genetically engineered (GE, this is often used interchangeably with GMO) foods to alert consumers who might wish to avoid them. As stated in the initiative, “currently there is no federal or state law that requires food producers to identify whether foods were produced using genetic engineering. At the same time, the United States Food and Drug Administration does not require safety studies of such foods.”4

I think given the choice, most of us would say “Uh, yeah, I should get to know what is going in my body.” I mean if you think about, more often than not we are privy to information telling us where our clothes were made, where our cars were manufactured, and what chemicals are in household products. It makes sense that we should also be allowed to know if the food products we regularly purchase are in part derived from genetically modified ingredients. Most large food companies and other organizations/groups however, think no. They make some decent points worth considering, so let’s take a look.

First point: We already do have methods of knowing for sure whether a food is GMO-free. Most GMO-free products have a label stating as such if given verification by the Non-GMO Project.5 It’s similar to the stamp of approval given if something is organic. We don’t require labels for non-organics, so in the same way we supposedly should not require labels for non-GMO’s. Those products that don’t use them will let you know. In fact, any product labeled as “organic” will also be GMO-free. That’s a fail-safe way to know for sure.

My take on this? I don’t think a GMO-free label is enough. In my opinion many products and companies will choose not to label themselves as GMO-free even if they do not contain them simply to avoid looking different from other products on the shelf. Also there may be backlash from giant conglomerates that want to make sure all products appear equal. I can only imagine there must be immense pressure to keep the status quo. Ok No Campaign. So far not convinced.

Second Point: Anti-labeling advocates state that studies show most consumers ignore or overlook food labels.6 This, then, would put undue strain and financial expense on manufacturers while providing no real benefit to the majority of consumers.  The Washington Research Council estimated in their position paper that the price on groceries would increase, on average, from $200-$520 per year per family. Most of this would hit lower income families.7

Well first of all this doesn’t make much sense for low-income consumers given point #1. If organic foods are the only options for low income families wishing to avoid GMOs then definitely their food costs are going to go up. We all know organic foods on the whole cost more. There are many products out there, however, that are not organic but may actually be GMO-free. This will give low-income consumers the power to choose and be more educated. Also, the fact that many consumers don’t use or ignore labels is a moot point in my opinion. There are many of us that DO use those labels and so that is simply a sweeping generalization they are trying to use to limit our right to know.

Third Point: Another big point of contention with the pro-GMO folks is that GMO foods are somehow unsafe. They take issue with the claim that the genetic engineering of plants and animals is, as the Yes Campaign puts it “an imprecise process and often causes unintended consequences. Mixing plant, animal, bacterial and viral genes in combinations that cannot occur in nature produces results that are not always predictable or controllable, and can lead to adverse health or environmental consequences.”8 Opponents contend that in fact these processes are quite precise and that the “changes” (ie consequences) are known because they are targeting very specific genes with predictable outcomes. The scientific method that researchers hold themselves to will ensure the process is designed, controlled, and reproducible.

Oh hold that thought one second. What a coincidence that I was just reading in this week’s Economist a whole article dedicated to the danger of bad science9, whether intentional or not. I’d like to pull out a few quotes worth noting.

“Academic scientists readily acknowledge that they often get things wrong. But they also hold fast to the idea that these errors get corrected over time as other scientists try to take the work further. Evidence that many more dodgy results are published than are subsequently withdrawn calls that much-vaunted capacity for self-correction into question. There are errors in a lot more of the scientific papers being published, written about and acted on than anyone would normally suppose, or like to think.”

“John Bohannon, a biologist at Harvard, recently submitted a pseudonymous paper on the effects of a chemical derived from lichen on cancer cells to 304 journals describing themselves as using peer review. An unusual move; but it was an unusual paper, concocted wholesale and stuffed with clangers (a mistake or blunder) in study design, analysis and interpretation of results. Receiving this dog’s dinner (meaning a mess or muddle, so says the internet) from a fictitious researcher at a made up university, 157 of the journals accepted it for publication.”

Clearly we have problems with science in many realms, from actual errors scientists unwittingly commit to the journals themselves not carefully scrutinizing the science before publication. What a mess. I think we have every right to be doubtful of the science backing the safety of GMOs given this is such a relatively new area of science and the stakes for some of these mega food corporations are so large that they have every incentive to promote and encourage science backing their claims. Remember all the science saying that fat and cholesterol caused heart disease? We now know it’s WAY more complicated than that. In the mean time people have continued to get heart disease who might have been helped or saved if the science had been accurate.

In my opinion, whatever the science says at this time, it’s still all a gamble with our health. At the end of the day, I feel everyone has the right to know in order to make an informed choice for themselves and their children.

Fourth Point: The No Campaign also points out some discrepancies with the fact that many other countries in the world already require mandatory labeling. These countries include Japan, China, South Korea, Australia, The EU, and Russia (yes, Russia), among other countries. Currently 64 countries ban or require GMO labeling.10 While this is an undisputed fact, the No Campaign states that the nature of their laws differ widely and are not nearly as strict as I-522 seeks to be. Many of these countries allow for a small percentage of GE-inclusion without requiring labeling. Some also don’t penalize those whose crops may have been inadvertently contaminated with GE material as our new law would. We would be showing far less tolerance while the rest of the world allows much more leeway. 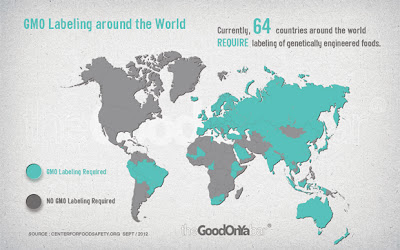 Hmm, interesting point, however I don’t see why we should vote down this law for being too strict. Heaven forbid. Yes, no doubt it’s sad that some crops have been inadvertently contaminated, and they should probably be given a ton of money by whoever was a careless jerk (insert cough that sounds like the word Monsanto), but I still want and need to know if that unfortunate food is coming into my home if not for the sole reason of keeping it out of the mouths of my young children.

Side note here. For the record, I get to decide what my kids eat. Not Kraft Foods. Not General Mills. Not Nestle. And certainly not Monsanto. I DO. I don’t care how “safe” you tell me they are. Even if they are safe, I GET TO DECIDE! Did I make my point clear? It’s the same with anything else, like the hot topic of vaccinations. I GET TO DECIDE. Any moms in the house hearing me on this one?

As for the small percentage of inclusion that some countries allow … whatever. That is their prerogative. I like the zero tolerance stance. Let’s know for sure. Maybe companies will even feel the need to tell us the percentage and we can then make an even more informed decision on our purchase, but I think going for complete transparency is a great idea. What else ya got?

Fifth Point: The No Campaign has one more last-ditch attempt to get you to vote I-522 down. They point out that while yes, many foods will be labeled under this new law, there are unfortunately way too many exemptions that allow foods such as meats, dairy and restaurant meals to escape labeling.11 We would be missing the whole picture, so to speak. There would be more confusion than actual education.

Seriously? If the exemptions were for specific foods known to be genetically modified (like soy, corn, etc), well then I’d take issue. But meat, dairy and restaurant food?  The difference with meat and dairy is that these involve animals that may or may not have eaten GMO food. It’s not that they themselves have been genetically engineered. Still a concern, but not quite the same thing. And restaurant food? That is an issue we can tackle later. What we are talking about is the majority of food purchased by the average consumer in the grocery aisle. And what we are also talking about is a first step in education and labeling. I don’t believe this law was intended to be all-inclusive. You have to start somewhere. Let’s get this ball rolling and see how we tackle the other concerns later.

I’m sure I’m missing a few other random points that have been argued against the case of labeling, but overall, I don’t believe the No Campaign’s arguments are strong enough. All it looks like to me is an enormous attempt by large food corporations to keep consumers in the dark about GMOs. Yes, maybe they are safe and we shouldn’t be making such a fuss …. but maybe they aren’t. When has big business ever had the general public’s best interest at heart? I don’t trust them to care about my health in the least, so it’s up to us consumers to face this issue and take a stand. Please join me, fellow Washingtonians, and vote YES on I-522 this November. 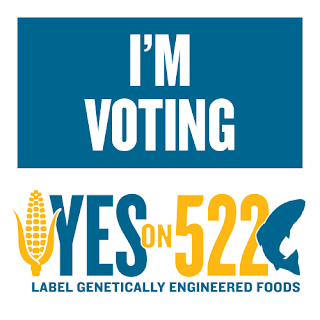 No Consensus on GMO Safety. European Network of Scientists for Social and Environmental Responsibility. http://sustainablepulse.com/wp-content/uploads/ENSSER_Statement_no_scientific_consensus_on_GMO_safety_ENG_LV.pdf

“Why Genetically Modified Foods Should be Labeled.” The Huffington Post. 4 Oct 2013. http://www.huffingtonpost.com/carole-bartolotto/why-genetically-modified-food_b_4039114.html

Posted in Uncategorized
← Buckwheat Waffles: Vegan, Gluten Free … Or NotHoliday Intuitive Eating and 10 Things You can Do to Stay Slim and Trim Through the New Year →